Well, certainly a day to remember, although I feel a bit better about it now after a shower and a good night’s sleep.
An ignominious start. Wanting to set off early, we appeared at our 7 am breakfast in full cycle gear. A quick visit to the ladies before we started made me realise the zip on my tri suit (under garment )was fixed firmly down near my waist instead of up near my neck where it should be. My eyesight is nowhere near good enough to sort such matters and so I had to ask one of the staff if my son could join me in the ladies to fix it.
Once we had recovered from this embarrassment we set off in heavy rain with the same forecast for the whole day. I elected to wear my Gore waterproof trousers for the first time – of course these were doubling as my evening trousers so we could guess there might be issues later. Still enthusiastic, just dripping wet,  we rolled into Durham with the promise of a Costa hot choc. After a good practice at cobble surfing we continued towards Durham on the A167. Generally this road does cater for cyclists although there were a few miles where we were forced to cycle on the pavement and had to stop every few metres to lift our bikes down and up the kerbs.
Back to cycling on the road and Pete immediately picked up a puncture, as you so often do in the wet. A clean slit in both tyre and tube – presumably glass. We were able to stop at a lay by (good) but the rain was torrential (bad) AND more importantly the tough endurance tyres that we purchased for the trip, Michelin Pro4 Endurance, are just about impossible to get off in the dry, let alone in heavy rain. Anyway, Pete managed it in the end but still had a 2mm slit in his tyre which he had patched with a Zephal glueless patch but with over 60 miles to go I was a bit anxious about whether this would last to York.
Into Darlington in now Biblical rain and a stop for soup and a freshly made a sandwich in a real ham, eggs and chips cafe but very kind and sympathetic staff. Still 50 miles to go.
On towards Northallerton. The A167 now became a much quieter road and the cycling would have been great if not for the rain.
We made a loo stop by a field gate. I climbed over and discarded the fourlayers of lycra necessary to get at the tri suit – this is normally a very quick operation and particular essential today in the rain – then of course the zip stuck again.

Frozen and drenched, I was wrong to think my son might appreciate the urgency of the situation. He was doubled up and helpless with laughter saying wouldn’t it be funny if he was done for trespass and had to make it worse by explaining that he had to help his almost naked mother with her zip. Not remotely funny, I thought.
Eventually moved on and had the pleasure of coming into Northallerton where Pete’s grandmother grew up – but 4 30 pm and still 35 miles to go.
We called into a cafe for a cup of tea and a shared slice of cake. By the time I came through the door Pete was chatting to an older man. He looked me up and down and then turned to Pete: “She doesn’t look like she could have cycled from John O Groats, does she?”

Once I had forgiven him for that, we learned that he had previously been a very active cyclist – cycling to Edinburgh at the week ends – and on a fixed wheel with a flip-flop hub – not sure what this is but it sounds pretty incredible.

Still 35 miles ahead of us but we stopped to pick up our pot noodles for supper. We had been having these for supper every other night – partly to reduce cost and partly to save on going out when we were tired. I can’t remember eating pot noodles since I was a student  but actually when you are exhausted and hungry they work surprisingly well. However the issue with pot noodles for cyclists with limited baggage capacity is their shape. We had tried all sorts of ways of getting them to our destinations – none of them satisfactory. Today we tried taping them to Pete’s tri bars with the insulating tape we had bought in Scotland to patch up my front light.
On to Thirsk and our road again became dangerously busy as we headed towards the A1. We turned onto the A19, a risky road but it was at least covering the miles quickly – the Garmin said 23 miles to York and I began to feel more hopeful.
Now Pete is a purist. The route we were meant to be taking was an unmarked wiggly but scenic route. After a bit of argument I agreed to try it instead of sticking with the faster but not scenic A19. Yes Pete’s route was quiet and scenic but now the Garmin was telling us 27 miles to York which I found disheartening. We persisted nontheless only to find 90 mins later, just as were were about to rejoin the A19 for the last 5 miles, our way was blocked by a serious looking road closed sign. Although we went and looked there was really no way round and we had to turn back. Really not happy at this stage and the rain was just as heavy.
Finally arrived on the doorstep of The Farthings in York looking like drowned rats and gave ourselves up to Helen who took us in out of the rain and ushered us towards a hot  shower, fluffy white towels and comfortable beds.  Rest day tomorrow – thank goodness! 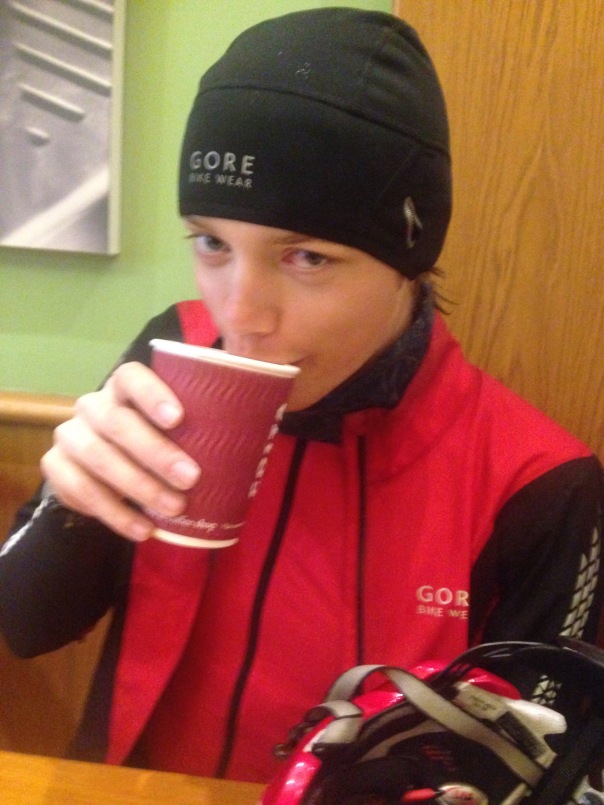 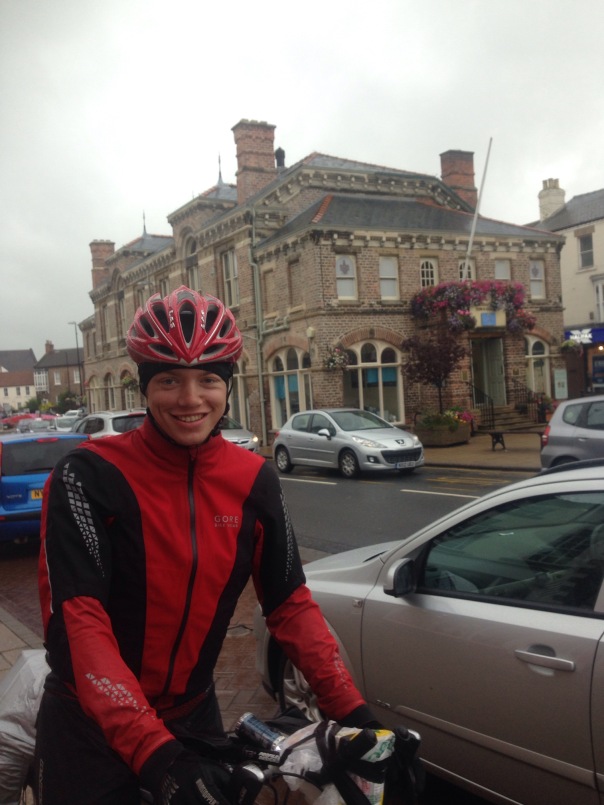